On February 13, 2016, HamWAN Memphis Metro along with partner Delta Amateur Radio Club deployed a new cell site at Methodist North Hospital. This site is the third such site to be deployed in the region, and soon much of the Delta Amateur Radio Club's infrastructure present at the hospital will be brought on network. "We're excited to have another regional hospital host our equipment," says Ryan Turner, President of HamWAN Memphis Metro.

Located at the intersection of New Covington Pike and Austin Peay Hwy, Methodist North Hospital is the second regional hospital to host HamWAN equipment. It is approximately 120 ft tall, and the site hosts numerous amateur radio repeaters, two network cameras, and a server. The site also serves as a redundant link between the existing midtown and east town sites.

The installation took a crew of eight people around seven hours to complete. All equipment was installed in the single visit. "I think everything went fairly smoothly," said Glen Popiel KW5GP. It serves end users within a few miles radius, the Raleigh area, and the north side of Bartlett. Methodist North (MNO) is MemHamWAN's first dual-polarity site, allowing users to connect with both horizontal and vertical polarity radios simultaneously. Clients connecting to Methodist North should use dual polarity equipment, such as a SEXTANT G 5HPnD, QRT 5, or BaseBox 5 with a dual polarity antenna. Note that none of Mikrotik's AC equipment is compliant with our band plan today.

Enter your email
Subscribe
On August 22nd, HamWAN Memphis Metro, Inc held its annual members meeting. The purpose of this meting was to conduct an open business meeting for members to participate and to elect directors for the corporation. Congratulations to the incoming board members: Cliff Gurlen, NS4B, is a long time maker and 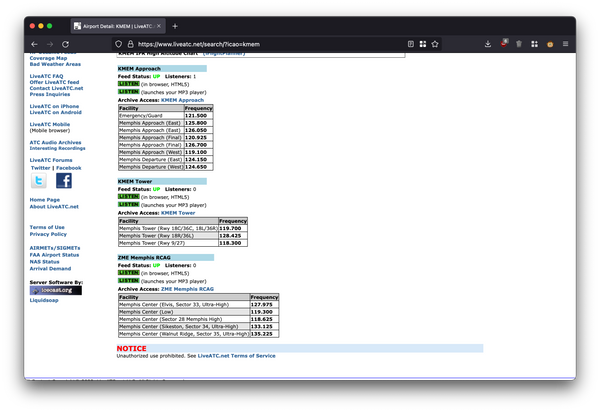 HamWAN Memphis Metro has entered into a partnership with LiveATC.net to bring Memphis-area ATC scanner feeds back online. As of this past week, these feeds are online and have already served nearly a thousand listeners. LiveATC.net is the leading website for aviation and radio enthusiats to listen to
Imagine discovering your tracker station on an APRS map for the first time. APRS is a frequent early project for new hams, many of whom first see their radio traffic this way. A 24-hour snapshot of APRS traffic recently as observed in the APRSIS (from APRS.fi [http://aprs.fi]